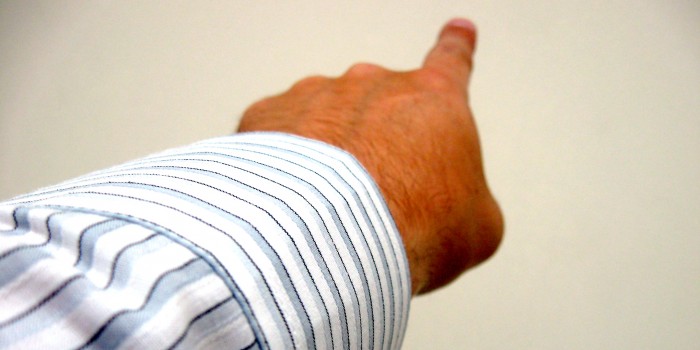 Has anyone ever said that to you? Probably so, if you are like me. You also probably have – at one time or another – made a big mess of something and said to yourself or admitted to others, “I goofed up.” While these aren’t easy words to say or to hear, they are survivable.

In a healthy family, it is possible to do something really wrong, and then admit that you goofed up and are sorry. Acceptance of your apology and forgiveness follow. Your relationship is restored, and made even healthier and stronger through this interaction. You are safe. If you grew up in this family, you are likely a healthy, functioning adult. Because you grew up in this family, you probably also have a much easier time understanding and accepting God’s unconditional love, grace and forgiveness, as the pattern that you learned and practiced in your family becomes central to your faith life – recognition of sin, repentance, confession, then absolution and forgiveness. Relationship restored. Relationship safe.

But this is not the way it works in many families – or social circles, or work places, or churches. If you are an adult, you can leave your social circle, job or congregation and find a healthier one. But if you are a child growing up in a critical, belittling and emotionally unsafe family, you can’t just leave. In these families it is not safe to say, “I goofed up.” Instead, the child learns to respond to his own mistakes in ways that are designed to protect himself. Here’s what they look like for children: “I didn’t do it!” (lie); “She made me do it!” (blame); “It’s no big deal!” (minimize); “Whatever, I don’t care anyway!” (distance and withdraw). And sometimes children go from thinking, “I made a mistake”, to “I am a mistake”, internalizing the negative, critical message from their parents.

Responses that these children learned to use in childhood, which were needed for emotional and sometimes literal survival, don’t just go away when they become adults. They don’t feel good about themselves and they experience high levels of shame. When something goes wrong, they aren’t able to say, “I made a mistake, please forgive me.” A mistake triggers the shame experienced in childhood, and they automatically fall back on the same self-protecting responses that helped them survive their childhood, but now with adult themes and consequences: “I don’t know what happened to the money that was in our checking account – I didn’t spend it!” (lie); “If you were a better wife, I wouldn’t have had an affair!” (blame); “I don’t drink any more than our friends do!” (minimize); “Go ahead and leave, I don’t care what you do.” (distance and withdraw). They feel bad about themselves, believing the critical, harsh statements of their parents, and this effects all of their relationships – including their relationship with God. They have a hard time believing that anyone loves them, and that God loves them, sent His Son to die for them, and welcomes them to come to Him to admit and confess their sin. They don’t know – because they have never experienced – fatherly discipline with love, designed and motivated by love so that He can grant them His forgiveness and their relationship with Him can be restored.

Here at LFS, we work with people every single day who have been damaged by life. We work hard to listen, hear and understand their hurtful past experiences so that we can help them resolve and grow past them. We work for those “ah ha” moments, when someone sees for the first time how the problems that they are having in their adult relationships and in their relationship with God are connected to their own painful history. We work to help them begin to challenge and change their opinion of themselves, based on their worth and value to God – and to believe what God, not their parents, has to say about who they are.