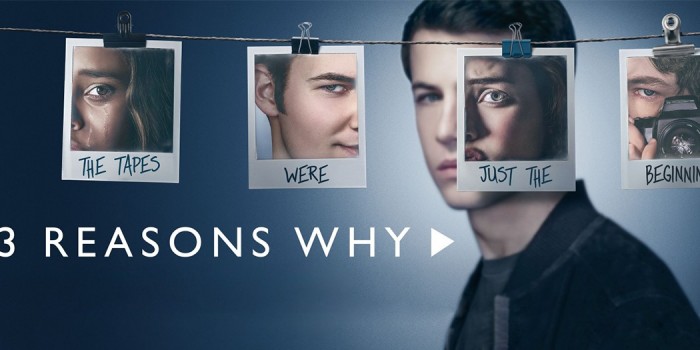 Season two of 13 Reasons Why is coming out on Netflix May 18th.

In the first season we learned about Hannah, and the ‘13 Reasons Why’ she committed suicide. She records her story on 13 cassette tapes, and the ‘star’ of each tape and her connection to this person is narrated during one show. The show flashes from past to present, detailing how this person hurt her, or how they let her down. Season two appears to be based around the fallout from rape allegations and everything Hannah said was going wrong in her school.

When I first heard about this series, I had a mental ‘cringe’ or ‘grimace’. Revenge by suicide could have been an accurate title for this series. Reaching from beyond the grave to say what you couldn’t, or tried to say, when you were alive is ripe with drama. And adolescents are known for drama because of their limited ability for insight and imagining a life beyond their current situations.

To recap: at this point we have a show where the main character, who is obviously depressed, narrates to other adolescents on how they contributed to her suicide, either directly or indirectly, being watched by adolescents who have their own insecurities, depression, anxiety, and teenage angst, whilst many of us adults were unaware. This show has scenes of sex, sexual assault, drinking, drugs, and little parental involvement in the lives of these teens. And until the news of this show spread, or ‘blew up’ it was being watched by many teens, likely without parental involvement. I imagine season two will have just as much drama, and tough topics in it, though this time around they are putting in ‘trigger warning’ notices just in case people watching it are triggered by their own emotional traumas.

What can parents, pastors, and church workers do? I cautiously recommend you watch the show.  If you have adolescents, I recommend you watch the show with them and discuss it as the episodes progress, and don’t binge watch it, watch one episode at a time, taking breaks. You know your child, their maturity, and if they can tolerate some of the more graphic scenes. I recommend you watch it with your child because adolescents will either watch it because they like it, or watch it because their peers are, and they want to know why. Teens are nothing but, ‘fit in with the crowd’ types of people – it is imperative to their survival in middle and high school.

The show narrates very well what people will do to keep their popularity, to not stand out with their peers. It also narrates quite well the consequences of ostracism and how very fickle popularity can be.  A final note on this, kids whose parents have frequent and open and honest discussions with them about sex, drugs, and drinking, are less likely to engage in those behaviors and more likely to go to their parents with questions or concerns.

My 13 Reasons for parents, pastors, and church workers to watch/learn:

I’ve mentioned the show can be used as a source of dialogue between parents and their children. It covers many difficult, but important topics our kids are facing in this world. Our job as parents, pastors, and educators is to give our children as much knowledge, skills, and abilities to live as faith filled adults, out on their own, without our daily presence ensuring they make the ‘right’ choice. One way to accomplish that is to ask questions and then listen to their answers.

I’ve listed some discussion questions or comments you can make to your children while watching the show. If you feel nervous about saying something, be brave and push ahead anyway. If we want our kids to talk to adults when they’re struggling to find the courage and the words, don’t we need to be a good example of doing the same? Don’t worry if they don’t say anything back, and don’t push for an answer. Think of it as placing thoughts for consideration in their head. Just because they don’t answer you, doesn’t mean they won’t think about what you commented on, or what you asked. They could be watching the show, feeling uncomfortable about something portrayed, but not have the words at that time to discuss it.

Your comment, without pressure, could offer them some much needed reflection and prayer time.

– I wonder how much of this is true, what do you think?

– It seems the kids let gossip get out of hand. I wonder if they wish they could take it back?

– Or, Wow, this really shows how gossip spreads and the other person’s side to the story. (Because there are always two sides to the story) It makes you wonder how often we believe information from other people without questioning the accuracy.

– I wonder how often we treat people poorly without having the full story? I’m sure I’ve been guilty of it.

– It makes me so sad that Hannah (and other kids in the series) were going through some very difficult things, but never reached out to an adult for help.

– It seems the kids spend a lot of time feeling misunderstood, and sometimes they try to communicate better with someone, but more often they don’t. I bet you’ve felt the same way with us, or with other people. Let me know what we can do better.

– It appears that these kids think if their parent is disappointed or disagrees with their child’s behavior it also means their parent is judging them. Even when we say, ‘what were you thinking, or how could you do that?’ we’re often just at a loss for words and fall back on these phrases.

– As kids get older, they pull away from their parents, and that’s natural and the way it’s supposed to be. But I wonder how kids can still let their parents know what interests them and what they’re thinking and feeling.

– These kids don’t seem to know what to do to make their bullies stop. They try to ignore it or laugh it off. They must feel so helpless or hopeless. What do you think would work better?

– I wonder how you can help make someone’s life better at school? Have lunch with someone sitting alone, smile or say hello to the person who appears to be a loner?

If you find yourself struggling to communicate with your teen, or wonder if they’re feeling depression or anxiety, LFS is here to help. And please keep these resources nearby:

6 Ways to Cope with Anxiety

How to Manage Your Anxiety

Hope and Help during Tough Times

Dreading the Holidays because of Social Anxiety?

Do You Ever Feel Stuck? Do the Next Right Thing