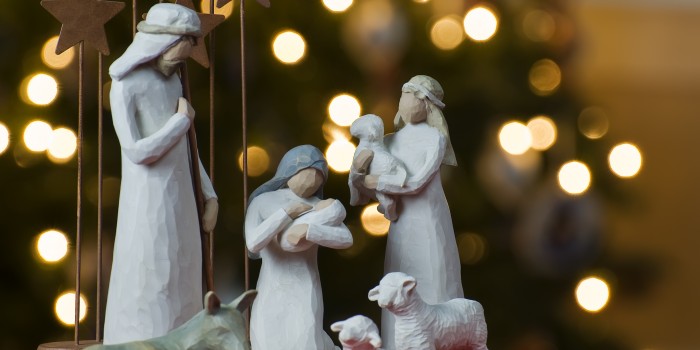 This is a true story of one woman’s experience at Lutheran Family Service. It has been our privilege to get to know Diane during the past year and we share her story with you today with identifying details changed and with her permission.

Christmas Eve fell on a Saturday in 1966. Like every other Christmas Eve service she remembered, the church was aglow with colored lights and smelled of fresh cut pine. Familiar music was coming from the pipe organ and the advent candles – all except for one – were lit. A sense of peace came over her as these sights, smells and sounds took her back for a moment to her family and her own congregation. She was just a teenager, and this was the first time she had been away from them.

Hushed conversations among the other worshipers quieted when she and five other girls who were obviously pregnant arrived for the midnight service. Her brief moment of peace was replaced by that now all too familiar sense of shame. She recognized it immediately. It was the same feeling in her gut that she had felt when the doctor first told her she was pregnant. It was the same shame that made her want to die as she saw the look of disappointment in her father’s eyes as she told her parents. It was the same shame she experienced in October as she left town in her mother’s car with bags packed full of maternity clothes and a few books, headed to Fort Dodge where she would live at the LFS maternity home until her baby was born.

She lifted her head to look at the other worshipers staring at them – all six of them, all in the later stages of pregnancy – as they filed into one long wooden pew under the supervision of Mrs. Tavis, their LFS maternity home house mother. Everyone knew where they were from and why they were there. The other five girls kept their heads bowed, eyes downcast. They felt it, too.

During the service, Diane shifted her weight uncomfortably in the solid, wooden pew. Well into her seventh month of pregnancy, it was hard to get comfortable. Looking for something to distract her from her pain, she picked up the bulletin. On its cover was a picture of Mary riding on a donkey, being led by Joseph toward Bethlehem. “Wow, and I am complaining about this church pew being uncomfortable,” she thought.

As she studied Mary’s face, the pastor began to read the Christmas story. Familiar words – she had heard them at every Christmas Eve service for the past 20 years. But this year – this night – they had a much more personal meaning: “…….and God sent the angel Gabriel to Nazareth, a town in Galilee, to a virgin pledged to be married to a man named Joseph, a descendant of David. The virgin’s name was Mary. The angel said, ‘Greetings, you who are highly favored! The Lord is with you.’ Mary was greatly troubled at his words and wondered what kind of greeting this might be….”.

Diane imagined Mary, pregnant, just as she was, without a husband. She could feel Mary’s shock upon hearing such incredible news. Like Diane, this was surely not the direction Mary had planned for her life. Like Diane, Mary had undoubtedly overheard the same whispered, cruel comments of others. She imagined Mary telling her father and mother that she was pregnant and knew the pain that she, too, felt at what must have been the look of hurt and disappointment in her father’s eyes. She felt the shame that Mary must have felt when she realized that Joseph would no longer want to marry her. She and Mary had so much in common.

Diane’s eyes left the picture as she tried to focus on what the pastor was saying. He continued reading the story. Mary was speaking with Elizabeth who, filled with the Spirit, had greeted her as the soon-to-be mother of the Lord: “……and Mary said, “My soul glorifies the Lord and my spirit rejoices in God my Savior, for he has been mindful of the humble state of his servant. From now on all generations will call me blessed…”.  It was here that her bond with Mary ended. Unlike Mary, Diane definitely did not feel “blessed among women” and was absolutely certain that future generations would not look back upon this time in her life and call her “blessed”. The service soon ended and she and the other five girls, along with their house mother, made their way back through the snow to the LFS maternity home.

Diane celebrated a quiet Christmas the next morning, away from her family and all things familiar. She had never felt so alone. Through the following weeks, she and her LFS counselor spent many hours talking about her family, her dreams, and what God’s plan for her life and the life of her child who was to be born in late January might be. Through these conversations and many prayers, Diane determined to do what was best for her daughter and for her. She chose to allow her to be raised by another family through adoption. When her daughter was 2 days old, she entrusted her to the care of parents whom she did not know and to God whom she had come to know quite well.

This year on Christmas Eve, as has been true for each of the past 50 Christmas Eves since 1966, Diane knows that she will again remember and feel a tinge of pain along with the joy of the celebration. She still has a strong connection with Mary when she hears the Christmas story. When her daughter turned 19, they were reunited and have remained in contact over the years. She attended her college graduation, her wedding, and her adopting mother and she celebrated together with her when she received her Master’s Degree.

Today, Diane says that people ask her if she made the right decision all those years ago. She answers, “Yes. She was loved and raised in better circumstances than I could have given her.” She wanted her to have a mom and a dad, and a stable Christian home life. But, she says, “Doing the right thing is not easy. Doing the best thing does not eliminate heartache. My daughter will never call me ‘mother’. She reserves that title for the woman who loved and raised her. But I am the one who loved her first and gave her the very best. I gave her into God’s tender care and another’s loving arms.”

This past May on Mother’s Day, Diane received a card from her daughter with a note inside that read: Just being thankful today that many years ago you made a decision for my life, to give birth to me. The parents who raised me are thankful and most importantly I know God in heaven is thankful. May your day be blessed, as it is noted in Proverbs 31:28 of the Virtuous Woman: ‘Her children arise up, and call her blessed.’  With tears of joy and amazement, Diane remembered Mary and her special connection with her. In spite of what other people thought, God had known her, loved her and heard her prayer. In His mercy, He wrapped His arms of forgiveness around her. He kept His promise to her that He would never leave her or forsake her. His love spoke directly to her heart when, through her own daughter’s written words, Mary’s vision had been fulfilled in her life, too. No longer filled with shame, she too – without a doubt – was honored and called blessed among women.

We share Diane’s story with you this Christmas for a reason. The rejection, shame and despair that she felt are not hers alone. In each of our lives, and in the lives of our friends, relatives and neighbors, there are times when we are overwhelmed by life and its problems. With each passing year, we have more and more evidence of the varied ways in which we can hurt and be hurt by those we love the most. In our pain and despair, we are tempted to believe that God has forgotten us, or that He, too, looks at us through eyes filled with disappointment.

Each day, the counselors at Lutheran Family Service – as they have as an outreach of the Lutheran church in Iowa for the past 115 years – meet with people who believe they are unlovable. Like Diane, many are scared and filled with doubt and shame. Sometimes they are hurt and angry. Always they have reached a point where they can no longer face life on their own and are asking for help. Through our work and with your support, we are here to help them. We are here to tell them if they don’t know and remind them if they have forgotten that they are not alone. We share Jesus, who came as Immanuel – God with us, as the source of lasting healing for all that has been broken.

Thank you for your support of this uniquely Lutheran Christian ministry to women, men, children, couples and families in Iowa. Together with you, we want Iowa to be a place where marriages are strong and lasting, families function well and care for one another for a lifetime, and men, women and children are emotionally and spiritually healthy. Through our programs of individual, marriage and family counseling, pregnancy counseling, adoption services, and our support of church workers and their families, we walk with those who are experiencing hard times and are there for them, just as God, in His mercy and love, has been there for us.

This Christmas, may your heart and home be filled with the love of family and friends, but even more so with a realization of God’s great love for you, demonstrated through His Son, Jesus.

So as not to limit our intentionally Christ-centered witness, LFS does not seek or use government funds. Your gift at this year’s end will support our work with families who come for help throughout the year. Make a secure gift online at www.LFSiowa.org/donations or contact Wanda Pritzel at 515-573-3138 or pritzel@LFSiowa.org if you would like to discuss ways in which your support can make a difference. Thank you!

4 Ways to Have a Meaningful Christmas

Avoiding Addiction Relapse During the Holidays

Holiday Traditions Pulling You in Every Direction?!