Will Iowa Become the New York of the Heartland? 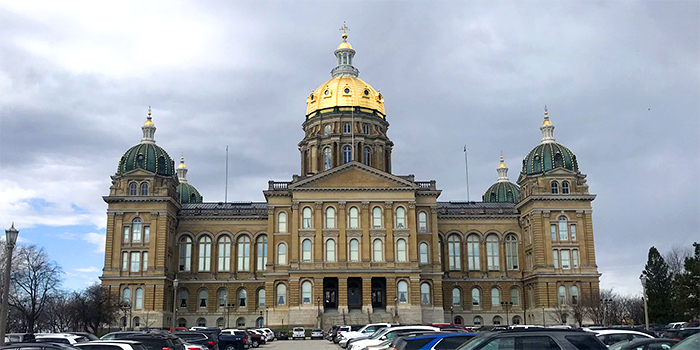 Many folks here in the heartland, where faith still influences their worldview, reacted with revulsion when New York passed legislation allowing the killing of babies during all nine months of pregnancy.  Revulsion increased when at the same time the New York legislature nullified a law that protected babies who survived an abortion from being killed.  Revulsion then turned to horrified unbelief when legislators hailed the passage with a standing ovation and when the One World Trade Center’s 408-foot spire, along with the Governor Mario M. Cuomo Bridge, the Kosciuszko Bridge and the Alfred E. Smith Building in Albany, were lit pink in “celebration” of the law.  “Well,” we say in disgust, “that’s New York for you, when it comes to the sanctity of human life they applaud and celebrate evil.”

We here at Lutheran Family Service (LFS) do not posture ourselves as alarmists, the-sky-is-falling kind of people.  Nevertheless, it is an alarming fact that Iowa may very well become the New York of the heartland regarding abortion.  Allow me to explain.

On June 29, 2018, the Iowa Supreme Court struck down the seventy-two-hour waiting period that was part of the twenty-week abortion ban passed by the legislature. The basis for their decision truly is cause for alarm.  The court rejected the “undue burden” standard and ruled in a 5-2 decision that the Iowa Constitution gives women a fundamental right to have their babies killed before birth.  It gets worse.  In this ruling the court essentially gave to themselves the power to amend the state’s constitution.  The judges claimed that they have now “freed ourselves from the private views of the Constitution’s founders” and that the Constitution can now be interpreted according to “current prevailing [and] evolving standards.” (As quoted in The Consequences of June 29 published by The Family Leader on their website at https://thefamilyleader.com/wp-content/uploads/2019/01/190125Consequenses-of-June-29-Ruling.pdf)

This radical decision is judicial activism at its worst.  Now all restrictions on the killing of the unborn, including current restrictions, can be declared unconstitutional.  The fetal heart beat ban,  for example, already has been over turned.  Any and all restrictions can be overturned.  Iowa could end up allowing unborn babies to be killed during all nine months of pregnancy.  Sound familiar?  Do we want Iowa to become the New York of the heartland?

The only way to keep this from happening is a constitutional amendment stating that the Iowa Constitution DOES NOT grant the right to kill unborn babies.

Allow me to review what it takes to amend the Iowa Constitution.   The amendment must be passed in two general assemblies.  A general assembly is made up of two legislative sessions running from the second week in January to April or May.  This past legislative session was the first session of the 88th General Assembly.  No vote was taken on what is being referred to as a “Life Amendment.”  That means it will come up for a vote in the next session which begins in January 2020.  Should it pass in that session, it would need to be passed again in the 89th General Assembly beginning in January 2021.  Then it would need to be ratified by a vote of the people in the November 2021 election.

Still with me?  If so, you will realize the importance of the November 2020 elections. It is crucial that we elect legislators who will vote for such an amendment.  Now some of you might be thinking, “Hey, this is getting way too political.  Should we be dealing with such issues in the church?”  The answer is, “Absolutely!”

Not only should we be dealing with them in our churches, Scripture compels us to do so.  “Open your mouth for the mute, for the rights of all who are destitute.  Open your mouth, judge righteously, defend the rights of the poor and needy” (Proverbs 31:8-9).  [Jesus said,] “Truly, I say to you, as you did it to one of the least of these my brothers, you did it to me” (Matthew 25:40).

We in the church need to see the killing of the unborn for what it really is.  It is not just a political issue.  It is a spiritual issue.  “For we do not wrestle against flesh and blood, but against the rulers, against the authorities, against the cosmic powers over this present darkness, against the spiritual forces of evil in the heavenly places” (Ephesians 6:12).  The devil loves the killing of babies.  He loves the burden of regret and guilt and shame it heaps upon those involved.  He loves making this great evil look good in the eyes of so many.  He loves the silence of the church.  That silence helps him proclaim his favorite line, “Did God actually say . . .” (Genesis 1:1c).

We also need to frame the discussion from our perspective.  It is not only defending against evil, it is proclaiming what is good.  We do not just affirm the life of the unborn because we live in a culture that doesn’t, but because we serve a God who does.  We are not just against what our culture is for, we are for what our God is for.  We do not uphold the value of life just because life is precious, but because it is precious to God.

The preciousness and value God gives to life is nowhere more clearly seen than in the cross.  There God demonstrates His great love for the unlovable.  There He pays the wages of sin that we could never pay.  There He gives His righteousness to the unrighteous and undeserving.  His empty tomb proclaims His victory over death, a victory He gives to us, a victory in which we live.  We do not strive for victory in our battle with death and its purveyors.  We strive IN victory that has already been won.

Christians, we are compelled to act.  What actions can we take?

Since a Life Amendment MUST be passed in the second session of the 88th General Assembly starting January 2020, we can start even now informing our state senators and representatives where we stand and why.  We need to remind them that this amendment will not outlaw the killing of the unborn.  It simply says our constitution does not give this right.  It places the power about making decisions on this issue back where it belongs to “We the people.”

Next, we must be vigilant when the 2020 elections roll around.  We must not let presidential politics overshadow the importance of electing state legislators who will vote for a life amendment.  God calls us to think and act as Christians in the public square.  We dare not allow the devil to deceive us into thinking that killing the unborn is akin to issues like tax reform or health care or fireworks laws.  It is not just “another political issue.”  It is a spiritual issue that insults the Lord of Life and assaults the work of His hands.  It is a disqualifying issue. If a candidate cannot defend the most vulnerable of human beings and does not seem to care about the devastating affect abortion has on so many women, then it does not matter where he or she stands on anything else.  A faithful Christian simply cannot vote for someone who sanctions the mass murder of children every day in our country and in our state.  Join us in praying and working to prevent Iowa from moving ever closer to becoming the “New York of the Heartland.”

The Iowa Coalition of Pro-Life Leaders, of which LFS is a founding member, has put together some resources to help educate people about this critically important amendment to our constitution.

Protecting Life! Too Precious to Tuck Away

I Had an Abortion – Can God Forgive Me?